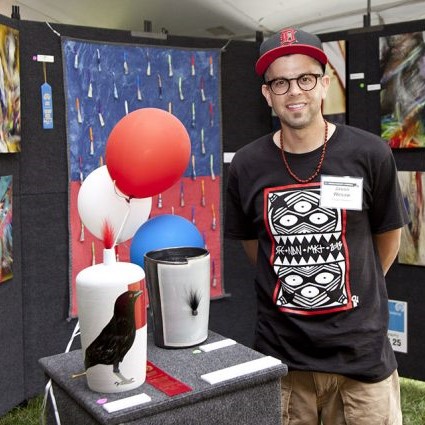 As a member of the Pokagon Band of Potawatomi Indians, Jason Wesaw creates art in a variety of mediums. His work is on display around the world, with plenty of upcoming shows that you can attend. This December, look for an exhibition of Great Lakes Native Art  simultaneously showcased at Grand Valley State University and the Muskegon Museum of Art. The exhibition will contain eight pieces created by Jason. The artist is also collaborating with the Field Museum of Natural History in Chicago on a major new work for the renovation of their North American Hall opening in Spring 2021. For those further afield, Jason Wesaw’s first solo European show will be comprised his new paper work at the Rainmaker Gallery in Bristol, England, is scheduled for Spring 2021.

Many of Wesaw’s works are inspired by nature and his Tribal culture. Since the pandemic hit, Wesaw and his family have tripled the size of their urban garden, a result of spending more time at home than normal. They planted a number of old, traditional varieties of plants and medicines for good health and to serve as an active teaching tool for Wesaw’s three children. All told, they enjoyed a very successful planting season! 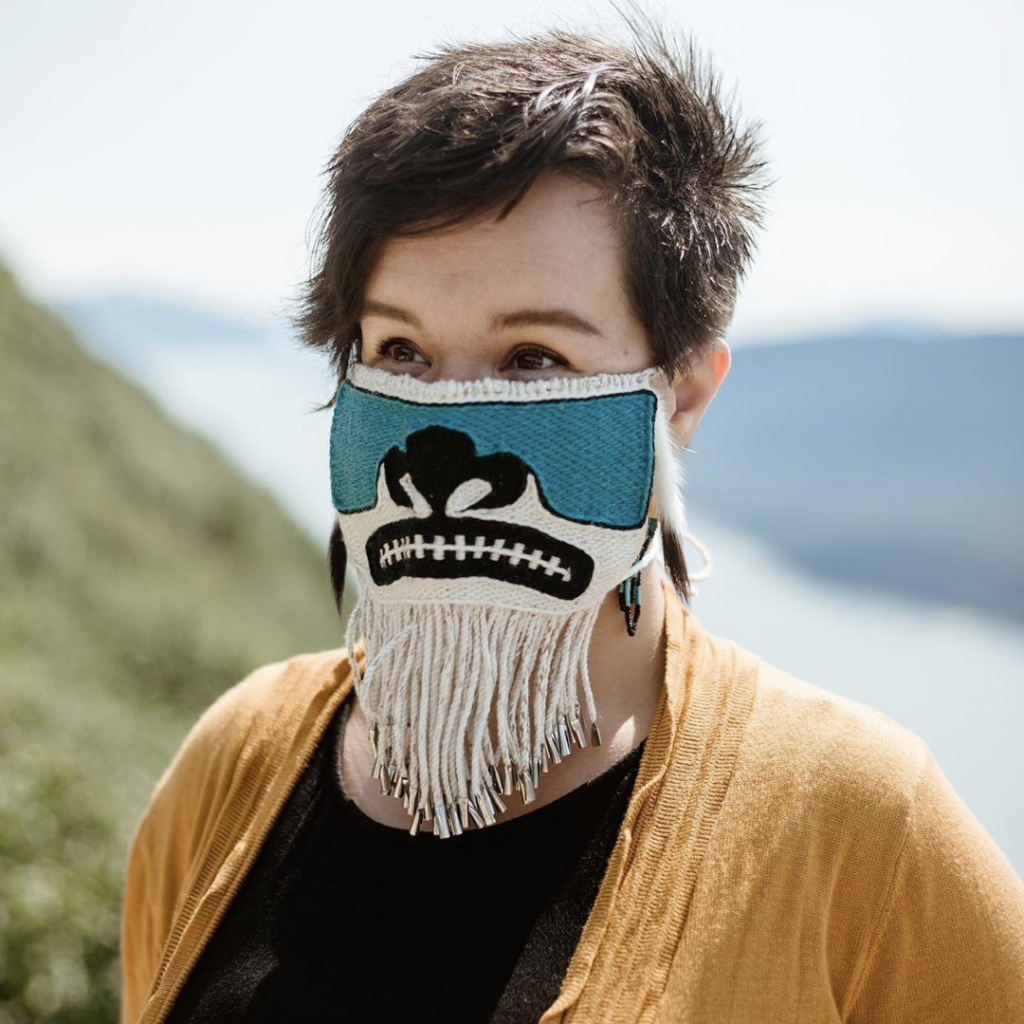 Based in Juneau, Alaska, Lily Hope is a Tlingit Citizen who blends spiritual teachings and Indigenous techniques in her Chilkat weaving. Chilkat weaving is an intricate hand-twined style that requires extensive training, dedication, and time. Fewer than a dozen Chilkat weavers alive today have the skills necessary to weave a traditional Chilkat robe, which can take several years to complete. Lily Hope is one of those few. The artist learned her weaving methods from her mother, who in turned learned from her mother, the famed Chilkwat Weaver Jennie Thlunaut.

To better protect the people of Alaska, Hope is an integral part of the #WHYAKMASKSUP campaign. This campaign seeks to bring awareness about wearing masks and elevate Indigenous voices in the process. Part of this campaign is Hope’s Chilkat Protector Masks. These colorful masks are stunning pieces of woven fine art. Each mask takes the artist about 60 hours of weaving time, not to mention the time it takes to hand dye and spin the material first. One such mask was gifted to the Sealaska Heritage Institute, where it will become part of the permanent collection. Lily Hope believes that these masks will serve as a reminder of the times as well as a piece of art that showcases the way that Indigenous people can and do protect one another.

As a proud member of the Pokagon Band of Potawatomi, Joseph Scott Winchester grew up knowing he was Potawatomi that his people lived with certain values and teachings and followed the teachings of their tribal council. As far back as junior high school at a Thanksgiving schoolwide assembly, Winchester proudly celebrated what being Potawatomi meant to him, spreading a message of “celebrate who you are and what you can be by honoring your past”. Winchester still spreads that message today. After receiving a Bureau of Indian Affairs scholarship, Winchester attended the University of Notre Dame and graduated with a degree in architecture. 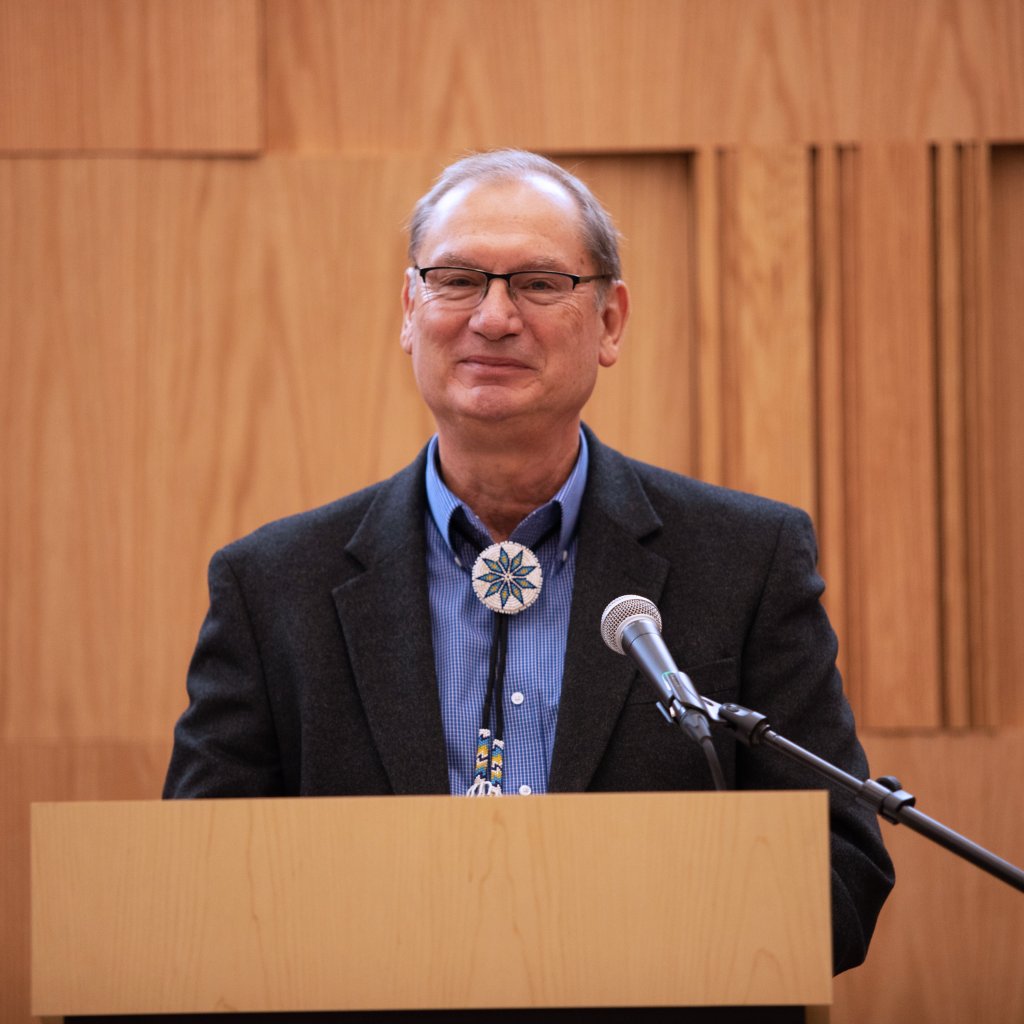 Today, Joseph Scott Winchester is an architect at Seven Generations Architecture + Engineering, a role he took on as a way to give back to his people. Since 1994, when the Pokagon Band of Potawatomi’s Tribal sovereignty was reaffirmed by the Federal government, the Tribe has been building its government and infrastructure. Winchester’s role at 7GAE has allowed him to further pursue his passion of positively impacting the lives of Indigenous peoples. He traveled to Washington, D.C. with others in pursuit of 7GAE’s 8A status, which allowed the company to leverage its Tribal sovereignty in business. One of Winchester’s favorite projects to date was the Dowagiac Middle School, which opened in 2005 and honors the Potawatomi heritage of Dowagiac through careful placement of various Potawatomi cultural items throughout the design. At the opening ceremony, Winchester and his family presented Dowagiac Schools with a dreamcatcher that hangs in the media center to this day and symbolizes the dreams of the middle school students. At the same ceremony, Joseph Scott Winchester received an eagle feather from his cousin, and to this day he can think of no higher honor.