The term pocket neighborhood was coined by Ross Chapin to mean “a cohesive cluster of homes gathered around some kind of common ground within a larger surrounding neighborhood” (Chapin, 2011, p.8). However, the concept of pocket neighborhoods, if not the moniker itself, dates back much further. For most of human history, people have clustered together intentionally. It is only in more recent history that humans have put such an emphasis on individual space, surrounding their properties with fences and privatizing green areas. Increasingly, however, people are feeling a greater pull toward human connection and a shared humanity. The growing interest for pocket neighborhoods reflects that fact. Rather than designing spaces that cut people off from one another, many designers and architects are working to create more environments that intentionally foster community. For many families, communities, and tribes, pocket neighborhoods are one solution that has the potential to reduce the individual costs of home ownership, build community, make it easier to transmit culture, encourage sustainability, and improve the health and wellness of residents.

WHAT IS A POCKET NEIGHBORHOOD?

WHAT IS A COMMONS?

A commons is the central shared space found in the middle of a pocket neighborhood. Every resident has access to it as if it was their own land, but at the same time is responsible for just a fraction of the upkeep costs. A commons can look different for every community. For many, the ideal commons is a green space. A garden or a park setting offers the benefit of nature and provides organic opportunities to meet with neighbors, picnic with family members, take a walk, or just enjoy the fresh air.

Any place in which people assemble,
indoors or outdoors,
irrespective of the duration of its occupancy,
can be considered a potential commons.
Sharing in the envisioning of
what a supportive and uplifting meeting
place might be
can awaken people’s sense of being in
a community.
It can reawaken the commons.
People can stake their claim on a commons,
through instant transformation of spaces,
barnraising and animating temporary settings
for special occasions,
or building lasting neighborhood and
community garden commons.
Karl Linn (2007)

The concept of housing clusters, or what we increasingly call pocket neighborhoods, can be found throughout history associated with a number of different cultures. From Australia to North America and just about everywhere in between, there are examples of communities where residents eschewed total privacy in exchange for increased safety and support.

In Australia, Aboriginal groups often camped semi-permanently. The commons for these temporary communities were fires, around which residents slept for warmth and light. Sioux Indians in North America found shelter under buffalo skin tipis arranged close to one another. These housing clusters could be packed up quickly, allowing for efficient transport. The Zulu of Africa often lived in homesteads called imizi, which included shelter for an extended family and social connections. Each imizi shared domestic, farming, hunting, and defense responsibilities. Each acted as its own unit, but still fit into the larger settlement. Modern pocket neighborhoods emulate this model by creating small clusters of homes that all fit together into a larger housing development. 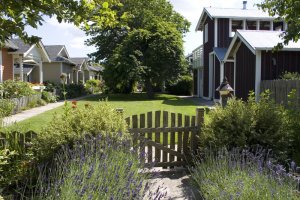 Many modern housing communities have embraced contemporary building techniques and materials while retaining the timeless community aspect embraced by humans for millennia. In Scandinavia, the Munksogard Elder Housing Community offers a vibrant neighborhood where seniors can live in close proximity, share resource, and enjoy companionship in old age (Durrett, 2009, p. 51-60). The residents of Munksogard don’t struggle with loneliness and depression as often as seniors in traditional private homes, but they still retain independence over themselves and their schedules. In the United States, a contemporary example of a pocket neighborhood is Third Street Cottages in Langley, Washington. A new zoning code provision called the Cottage Housing Development Code was implemented in order to legally accommodate this eight-cottage pocket neighborhood. Each cottage is approximately 650 square feet, with the eight cottages surrounding a shared garden, a common building, and a shared toolshed. An ongoing project designed by Seven Generations Architecture + Engineering is the Bay Mills Elder Housing development made up of eight housing units for tribal elders. Each home will offer plenty of privacy to residents, but each house looks out onto a shared common space. Community nodes create spots to relax, mingle, socialize, and exercise with others. With the completion of Bay Mills Elder Housing, 7GAE plans to continue designing more of these community oriented housing developments for tribes across North America.

If you would like to receive our whitepaper all about the benefits of Pocket Neighborhoods, please email info@7genae.com and we will gladly send you a digital copy.